Davidson Co. ready to assume management of prison from CoreCivic by October 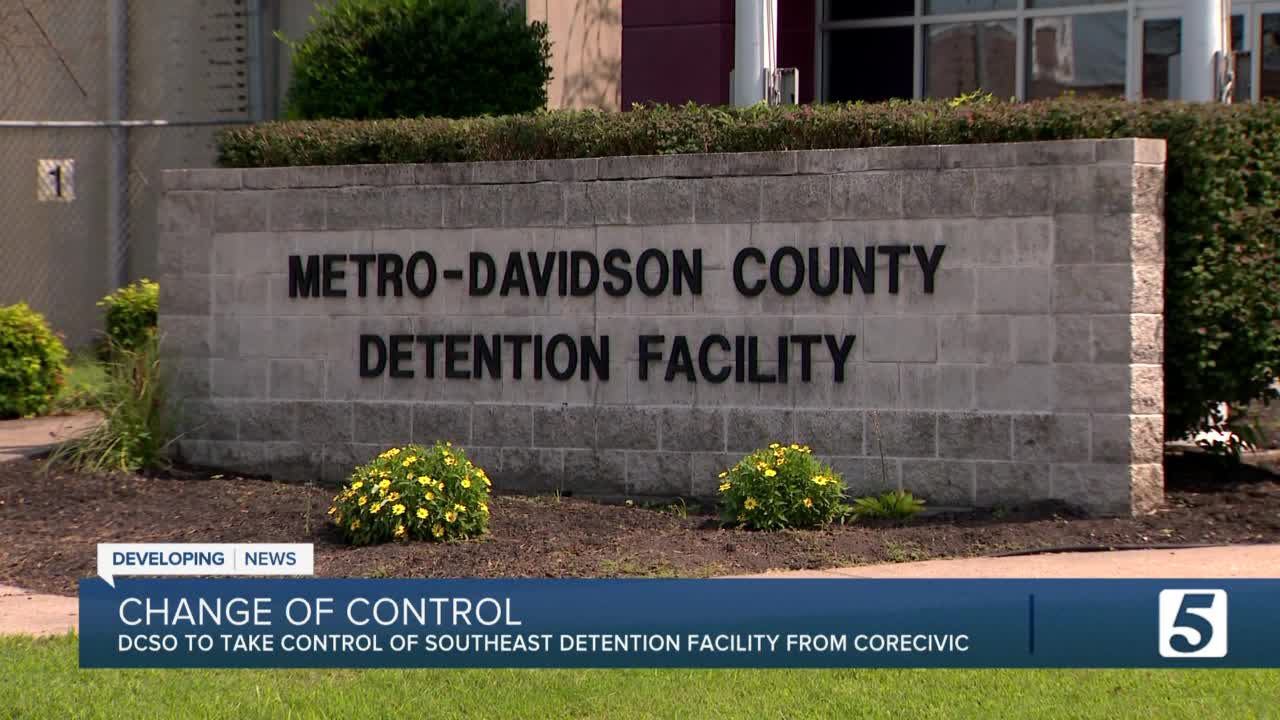 The Davidson County Sheriff's Office will be taking control of the Southeast Detention Facility from CoreCivic.

NASHVILLE, Tenn. (WTVF) — With CoreCivic soon out of the picture, Davidson County plans to take over full control of the Metro-Davidson County Detention Center, months before they had hoped.

Sheriff Daron Hall hasn’t spoken much about what the plan has been since July when CoreCivic announced they wouldn’t re-sign a new contract. His reason is simple, he had no choice but to begin working on the transition as soon as possible.

“Unfortunately there are a lot of people having to do a whole lot of jumping through hoops to make it happen,” Hall said.

Days after Corecivic sent a scathing letter to Hall and several city council members, Hall says he wrote a letter of his own. This time addressed to the employees working at the prison. The letter said, “we need every one of you.”

Of the more than 180 employees currently working at the prison, 130 have been retained and Sheriff Hall says they’re in the process of hiring more staff to make up the difference.

They are as he puts it, “the most expensive resource, but also the most important.” They may have been paid by a private company before, but many were initially hired by the Davidson County Sheriff’s office who has long been in charge of overseeing the prison.

“We’re going to be ready, but let’s be clear this hasn’t been handled the right way,” Hall said.

From the very beginning of the negotiations between Metro city council and CoreCivic, Hall says he suspected CoreCivic was ready to walk away. The 30-year relationship had soured over the past several years and a recent bill by Councilwoman Emily Benedict and others to end privatization would ultimately be the last straw.

Hall says when the bill was first filed, by then he had never even met the newly elected Benedict.

“Not that we shouldn’t do away with privatization, but why in the world in the middle of a pandemic,” Hall said.

Hall says he and Benedict have since talked and worked through their differences to come to a compromise.

He explained to council members that if the sheriff’s office was going to assume responsibility for managing the prison, they were capable of doing so as long as they had at least 9-12 months to prepare.

What Hall was left with is three months.

In the same letter from CoreCivic back in July, Hall and the council were accused of effectively forcing the company out of Nashville. The group claimed that by doing so, the transition would cost the city millions, further straining the budget and also “jeopardize the life-changing reentry programming currently delivered to the inmates in our care.”

“There was some activism that I think was a little overzealous early on in July that I think upset the private company. Who I think also mishandled it and then reacted,” Hall said.

CoreCivic declined to comment beyond what was written in their letter, saying “the letter speaks for itself.”

Hall says we can expect there to be a $2 million startup cost that would fund training and hiring new employees and other logistics.

As for the long-term cost, he says this is part of why he needed at least six months to properly evaluate the facility.

“We’ve done all that in a very rushed way to try to evaluate what do we need to operate on October 4,” Hall said.

Next July, Hall expects to have the figures ready for the Metro Council to review. The state of Tennessee pays for the majority of operating costs, but the remainder of what’s leftover is the sticking point for Metro.

As for the inmates, Hall says he doesn’t expect there to be much disruption at all. All the inmates at some point had to make their way through the Davidson County jail system before being sentenced to prison.

The programs unique to CoreCivic will end, but Hall remains committed to continuing programs related to vocational training and treatment with the very same staff already handling those responsibilities.

“I just hope Nashville learns a lesson from this. We could do it in a better pace and maybe the outcome would be better as well,” Hall said.