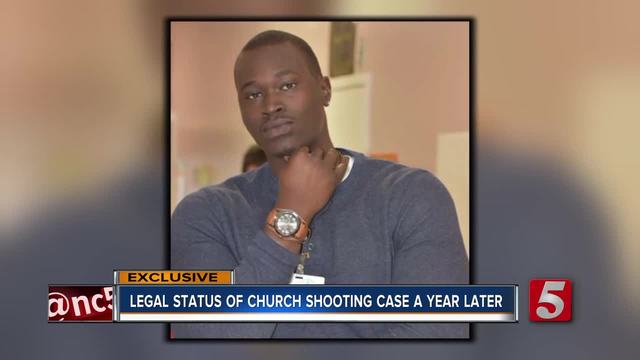 Monday marks one year since a man pulled a gun and started shooting at an Antioch church. A woman was killed and several were injured. One year later, we now know more about what to expect in the criminal prosecution of the alleged gunman.

Monday marks one year since a man pulled a gun and started shooting at an Antioch church. A woman was killed and several were injured. One year later, we now know more about what to expect in the criminal prosecution of the alleged gunman.

Metro police said Emanuel Samson admitted to the crime, but he then pleaded not guilty. A gag order remains in place, silencing the lawyers in this case.

Samson is charged with killing 39-year-old Melanie Crow and injuring several others in the mass shooting at Burnette Chapel Church of Christ in Antioch church in September 2017.

Samson was later indicted on 43 criminal counts, including murder. Police said he admitted to the shooting.

But then his defense attorney, Jennifer Thompson, said this past March in court, “I've reviewed the indictment for Mr. Samson so I'd like to enter a plea of not guilty at this time," said Thompson.

Not guilty, despite a confession.

Keep in mind, Thompson entered that plea before the District Attorney announced he would not seek the death penalty against Samson.

It's possible with death off the table, Samson could now change his plea or the defense could still push for a trial and argue Samson is not mentally fit.

"The biggest part of the case is the battle of the experts when it comes to insanity or diminished capacity," said legal expert attorney Jim Todd.

There have been some hints to Samson's sanity. NewsChannel 5 has obtained exclusive recordings of Samson's jailhouse phone calls. Here he talks with his girlfriend about his state of mind the morning of the shooting.

“Everything about that day… man, dude, it's just like to say that I would be a fool to leave you," said Samson.

"You know what? You're right. That is exactly what I was saying to them or whatever," said Samson.

Did this call hint that Samson planned to shoot up a church and was he rational? That will be the central debate if -- and that's a big if -- this case ever goes to trial.

Samson remains locked up in the Davidson County Jail and held without bond.

To date, there is no record that he has yet been sent for a mental evaluation and no trial date is set.