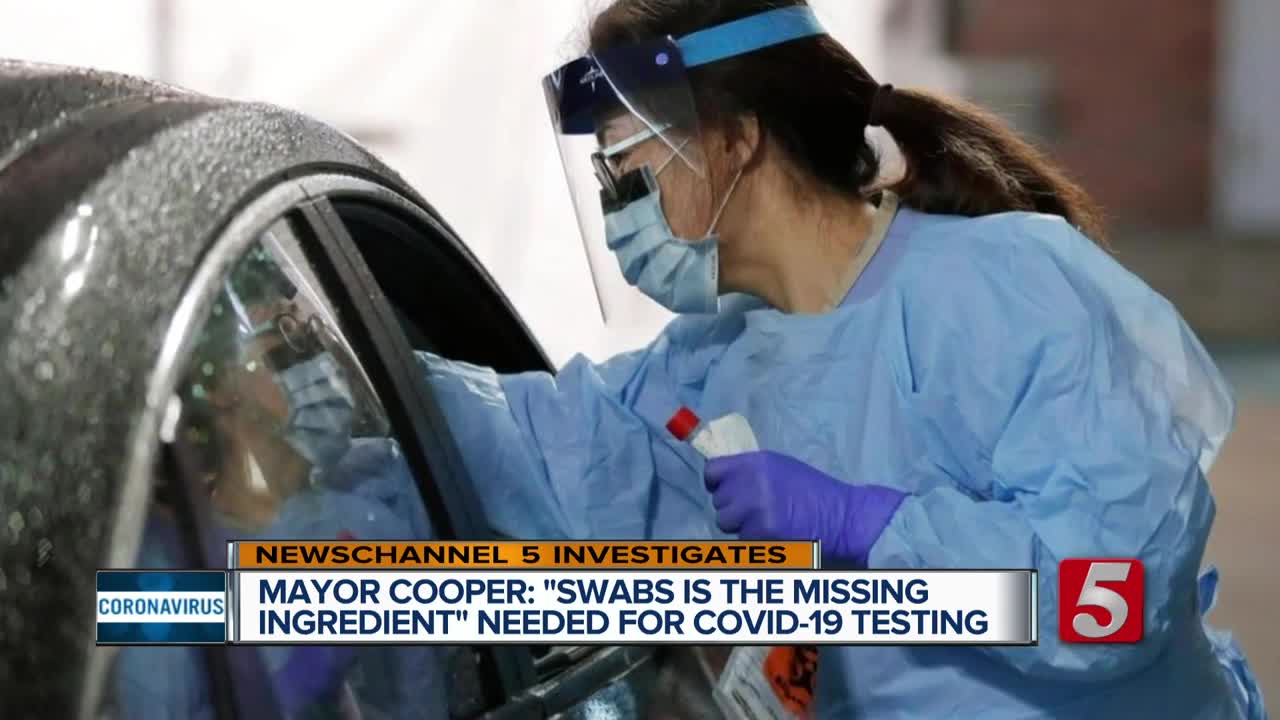 Ever since the COVID-19 crisis erupted, Metro Nashville has been trying - without success - to get its own testing centers up and running. So what's it going to take? 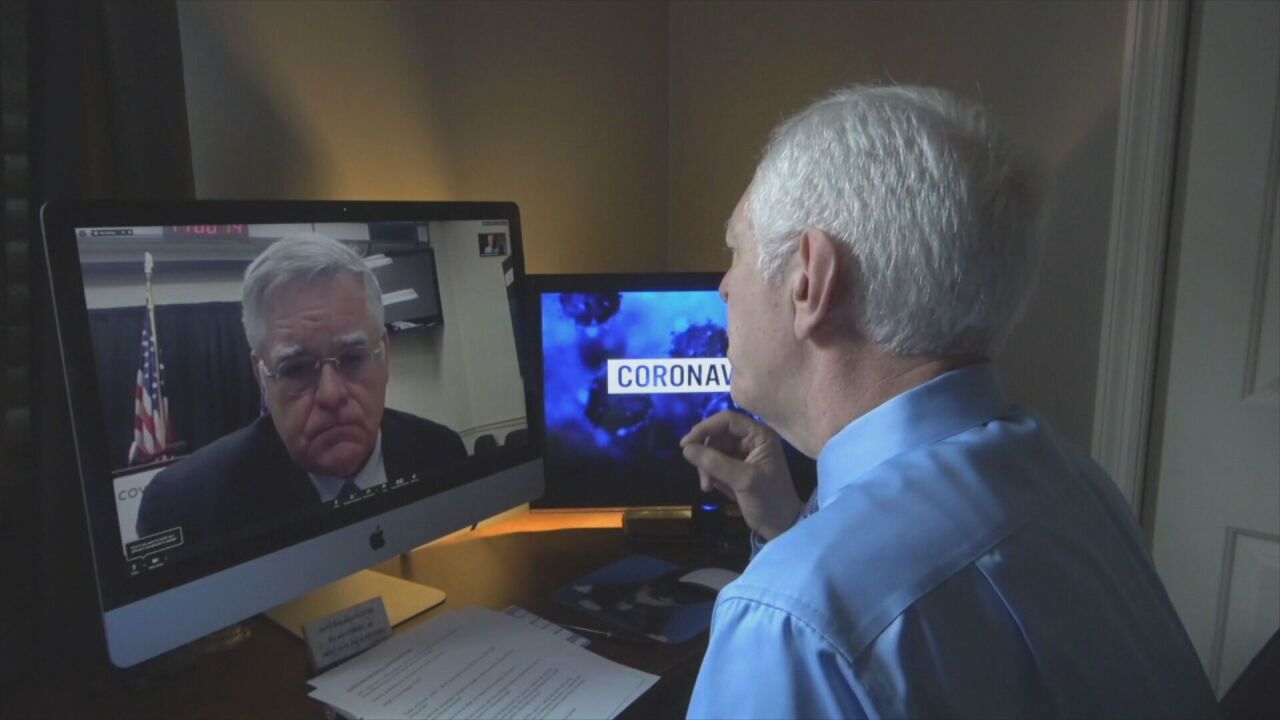 NASHVILLE, Tenn. (WTVF) — Ever since the COVID-19 crisis erupted, Metro Nashville has been trying - without success - to get its own testing centers up and running.

So what's it going to take?

In an exclusive interview with NewsChannel 5 Investigates, Nashville Mayor John Cooper said it's down to one issue: swabs.

"We are down to just missing swabs," Cooper said.

"Swabs is the missing ingredient for us to become completely functional. I think that can be cured with a tractor-trailer load and working with the federal government. The swabs will be available, I’m told, shortly. We call on an hourly basis, asking about this - and we're down to one last part that's needed for the centers to be in action."

Nashville has at least three drive-thru testing stations set up and ready to start conducting tests for COVID-19.

But unlike other sites around the country, officials first had trouble getting protective equipment to wear.

Now, they can't get the test kits they need.

NewsChannel 5 wanted to know, "Why are other cities and states getting swabs and we're not?"

"Well," the mayor said, "that is now a question that I'm glad the governor is accepting for his office of unified command to be responsible for."

Cooper said he hopes those assessment centers will be up and running by the end of the week.

WATCH PART 1 OF INTERVIEW WITH MAYOR:

NewsChannel 5 Investigates is committed to asking the questions you wanted answered during this Coronavirus crisis.

In a wide-ranging exclusive interview, the Nashville mayor addressed why he and health officials felt it was imperative for the city to issue a "Safer-At-Home" order, shutting down non-essential businesses.

Where are we in this crisis?

We wanted to know where are we in this crisis and what should Nashvillians expect in the days and weeks ahead.

"Well, Phil, I think we're in the early days, most likely," Cooper said.

"With a quicker response, we hope to limit the time that we will be in the socially distance period. But almost certainly we're in the early days. The state now has given guidance about school not resuming until the end of April. So now April is clearly going to probably be a month where social distancing will be required. So now we're only really a week or 10 days into it -- in what will be several weeks -- but we hope to limit it to weeks and not months.

"Now that's the important thing for your viewers to understand. The better we socially distance, the quicker we can come out of this."

NewsChannel 5 Investigates asked, "In two weeks, do you think we'll be looking at hospitals that are overflowing with patients?"

"Well I hope not," the mayor answered. "It's one of the reasons why we acted more quickly, was to flatten the curve to reduce the load on hospitals and also, frankly, to prepare if our hospitals were more heavily used. Right now, there is a ton of capacity there - and they've done a great job. We do not really have that many people hospitalized now, but we are prepared for worst case scenarios as we should be."

WATCH PART 2 OF INTERVIEW WITH MAYOR:

Will Nashville be able to pay its bills?

Cooper acknowledged that the partial shutdown has devastating economic consequences.

"It's a terrible choice to make. But I think -- if we were effective at social distancing -- we'll look back and go 'We had a terrible month. We might have had two terrible months but we did the right thing and saved lives.'"

Cooper ran for mayor last year, arguing that the city of Nashville was carrying far too much debt.

Now with the city facing a potentially devastating hit to its tax base, the mayor insisted it will be able to meet its financial obligations.

But it will be tight.

"We will have lots of financial pressures," Cooper said.

"This is, by far, the worst recession that anybody will have lived through, I believe, in terms of its suddenness -- to go from 100 to 15 or 10 so suddenly. That has a direct effect on Nashville. When we do this again we're going to remember that sales tax money is non recurring revenue, you know, that you can't count on that sales taxes can go away. So that's why I said he's needed to have larger cash balances, and on the other end of this we will have financial policies that will be more deeply informed about the city should be financing itself."

The mayor explained that one piece of good news is this crisis occurred after February property tax revenue had come into the city coffers - and the stimulus package from the federal government will also help.

Finally, NewsChannel 5 wanted to know what sustains him during this time of crisis.

"What sustains me? I'm not sustained,- I'm inspired -- by what's going on, by people," Cooper answered.

"You should see these healthcare responders. They're incredible. They are incredible -- and we're going to need more of that in the weeks to come to be sure.

"And if we get to the other side and everybody says, ‘Oh, it was not that big a deal,’ what a blessing. Then our prayers are answered, and we knew we did the right thing.

"That's a great outcome if it's viewed that we over-responded. Let's not be in the position of feeling like we under-responded at a moment when we could do great things for our fellow citizens.”

See all our Coronavirus coverage here