Metro Nashville Public Schools sent out a news release Friday attacking NewsChannel 5, after the district was forced to cancel a school board retreat where it planned to discuss the district's $924 million budget out of the public eye.

A statement from school board chair Anna Shepherd, however, showed no concern about the need to comply with state law.

"An NC5 reporter is interfering with a government process by bullying us with fake news," Shepherd said, according to the news release from public information officer Michelle Michaud.

MNPS, however, can't decide what its story is.

First, the statement claims that the retreat had been "planned for months and was one of four retreats posted on the MNPS web site weeks ago."

But this is what the board's calendar looked like before NewsChannel 5 posted our story (see below). 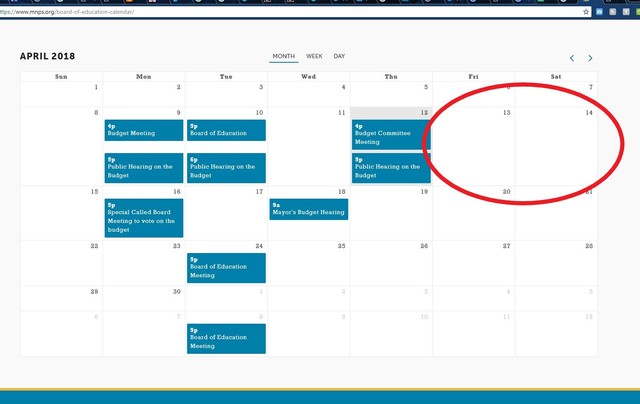 There is no mention of a scheduled board retreat on April 13-14.

Despite the lack of a public posting, NewsChannel 5 Investigates discovered that the board planned to hold its retreat on those days.

Instead of holding the meeting at board headquarters, which has room for the public, MNPS had booked it at the district's Martin Professional Center near Vanderbilt.

An agenda sent out to board members Thursday morning showed that MNPS planned to discuss the ongoing budget controversy. (See below.)

In addition, while the district had extensively advertised when it planned to discuss next year's budget, the retreat at the Martin Center was never mentioned in the budget timeline. (See below.)

When NewsChannel 5 Investigates first contacted the spokesperson, Michelle Michaud, about the unannounced meeting, she emphatically insisted in an email: "They cancelled the meeting several days ago."

However, multiple board members confirmed that they had not been told that the retreat had been cancelled.

Michaud later backtracked, "We are waiting on information from our attorney."

NewsChannel 5 never heard back from the public information officer.

Then, at the beginning of a 4 p.m. school board meeting on Thursday, budget committee chair Tyese Hunter suddenly announced that the retreat had been cancelled.

Reading from a prepared statement, Hunter seemed to acknowledge that the district had made a mistake.

"Since the public posting of the board retreat was inadvertently not posted this week until this afternoon, we have cancelled our retreat for tomorrow and Saturday," Hunter said.

But Michaud soon had another story.

In an email to other news organizations, Michaud told them that "the meeting in question was cancelled earlier in the week and added back early this morning."

She said that board staff "forgot to put it back on the website calendar." 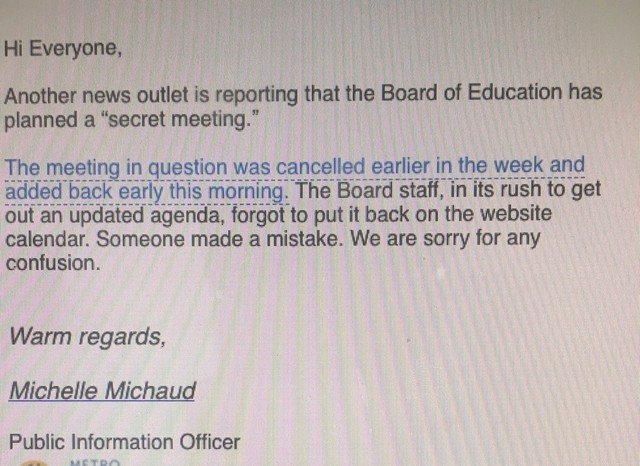 Again, multiple school board members confirmed that the retreat was never cancelled.

Even so, publicizing a meeting, cancelling it and then rescheduling it without public notice is illegal under Tennessee's Open Meetings Act, also known as the Sunshine Law, experts agree.

But, by midday Friday, Michaud's story had changed again -- and so had the board's calendar.

It suddenly listed the April 13-14 retreat -- with a note that it had been cancelled. (See below.) 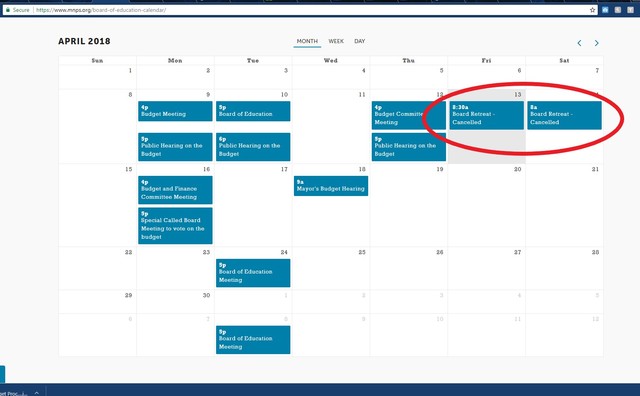 In the news release sent out Friday, Michaud no longer claimed that a temporary cancellation of the retreat was the cause of the mix-up.

"This last Wednesday afternoon, we decided to adjust Friday’s agenda to be more in line with the work we are doing around our budget process," Michaud's news release said.

"We took the agenda down to make those agreed-upon adjustments. After the adjustments were made, we sent the amended agenda to those who needed to make changes in their presentations. As soon as we had notified all concerned, we re-posted the meeting on the MNPS web site."

Even if that were true, the news release does not address how quietly reposting an agenda the afternoon before a major budget discussion would have complied with the state's Sunshine Law.

This isn't the first time that MNPS and its spokesperson have made questionable statements.

After NewsChannel 5 revealed a secret recording in which a district official was heard plotting to bypass filters meant to remove toxic lead from school drinking water, Michaud falsely told CBS News that the filters would not have worked on the district's water.

One vendor who supplied MNPS with filtered water stations told NewsChannel 5 Investigates that his company was aware of Michaud's claims and "we too are confused by her statement as it is not correct."