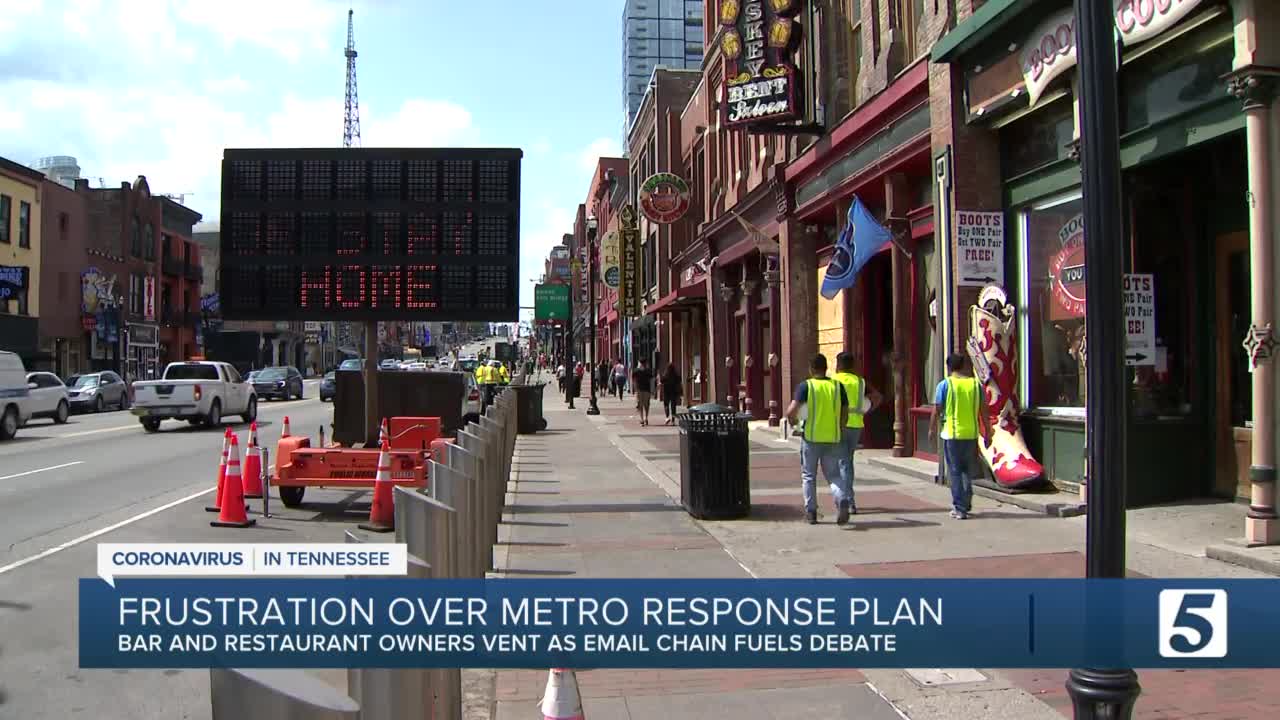 Several bar and limited service restaurant owners on Broadway are still angry with how Nashville officials have handled the COVID-19 response plan. 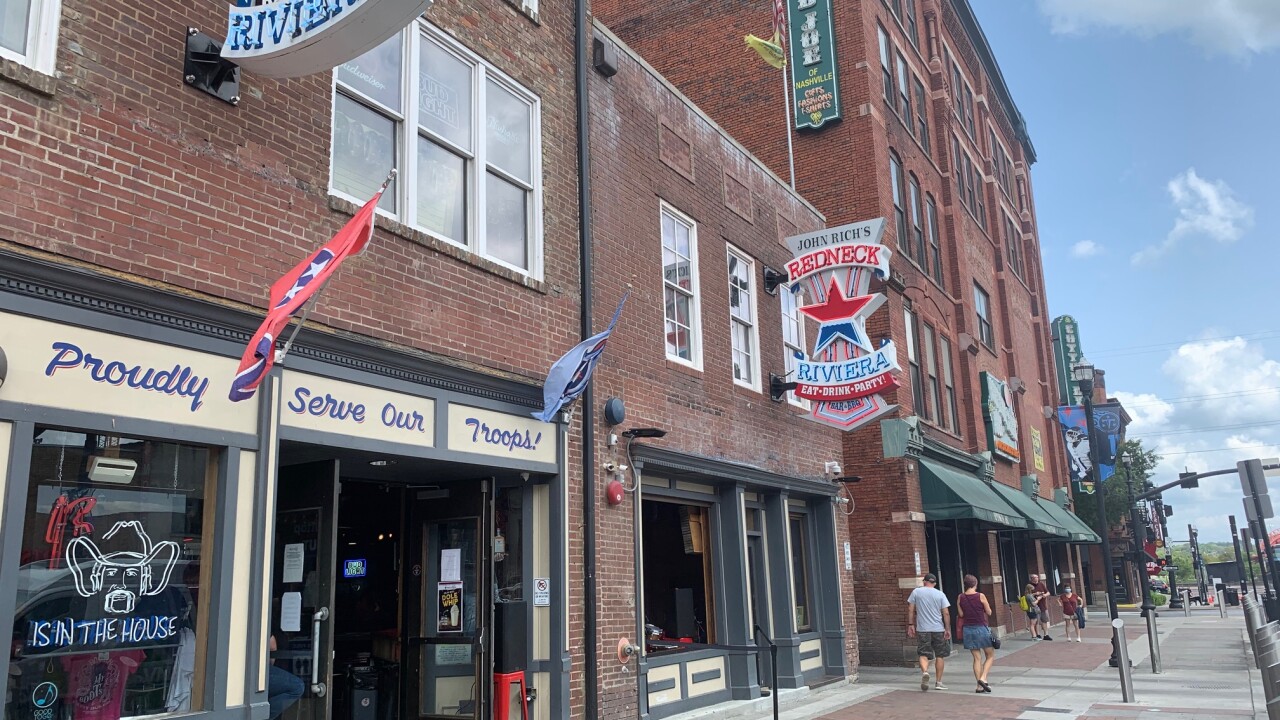 Tin Roof’s Bob Franklin said restrictions due to COVID-19 have drastically hurt his livelihood. “The night life economy is what makes Nashville go. It’s what we built this city on, and we’ve thrown out the musicians, the sound engineers, the bartenders, and the servers like they’re less than human, and we have to understand that there is a better way.”

Much of the scrutiny around opening the bars was renewed earlier this week after a local reporter said emails from the Mayor's office showed they hid the numbers on COVID-19 cases traced back to Nashville bars from the public.

On Thursday, Mayor John Cooper’s office released emails dating to July 29th, which said at the time there were approximately 80 cases connected to bars and restaurants. During a morning press conference, Cooper said this was a factor in the city’s decision to shut down bars temporarily before the July 4th holiday.

“The industry in my opinion has been scapegoated," Franklin said. "No other industry has been treated like this.”

John Rich, a country music star and the owner of Redneck Riviera, said it was his understanding that Broadway bars were linked to thousands of cases. “When you hear such a small amount of cases were traced back to Broadway, in reality when you put that across from the destruction that has happened with our businesses, with the people who work there, it’s one of the most egregious things I have ever seen,” Rich said

Benjamin Eagles, a senior adviser in the Mayor’s office, said COVID-19 cases have gone down, so he believes they made the right decision.“As for is a specific number sufficient to take public health action to save lives, I would defer to an expert on what is a sufficient number of cases, and number of lives lost, that we should tolerate," Eagles said.

Eagles showed us a graph he says shows that right before July cases linked to bars skyrocketed.

“The decision to ask businesses to turn away customers, or close their doors, is extremely difficult for everyone involved, and we know that people’s livelihoods are at stake,” Eagles said.

For now, bar owners are going to try to salvage what they can. “We want to have a city when this is all done with... and do we want it to be Music City when it’s all done with? I do I love the city so I want it to last,” Franklin said.

On Thursday, Mayor John Cooper announced that on Friday bars and limited service restaurants can allow half capacity and stay open until 11 p.m.

But later in the afternoon, Tennessee Governor Bill Lee called for Nashville to open up further, while also denying a request from Mayor Cooper for more COVID-19 relief funds.

The mayor statement on the number of cases of COVID-19 in bars is below in full:

“A recent news story by FOX17 Nashville was published with limited information and without context, using screenshots of Metro emails to falsely accuse the Mayor’s office and the Metro Public Health Department of withholding public health data that had previously been shared with and published by another local news outlet, the Tennessee Lookout, on August 4th, 2020. Emails from the same thread emphasizing the need to publicly release as much COVID-19 data as possible, which were omitted from the FOX17 story, are attached.

“On June 29th, following a nationwide spike in coronavirus cases, the Mayor’s office emailed Metro Public Health asking its staff to share the results of its contact tracing investigations to help identify the sources and spread of COVID-19 in Davidson County to help guide an appropriate policy response. Up to that point, Metro Public Health had typically tracked infections to broader categories of sources – such as workplace, community, household, and travel – but the Mayor’s office requested more specific sourcing, including bars, large gatherings, and weddings, as examples based on national trends.

“Two days prior to these emails, the weekend before the July 4th holiday, the MPHD epidemiology team had contacted Dr. Alex Jahangir, Chair of the Metro Coronavirus Task Force, to alert him that, for the first time, clusters of cases had been linked to bars in Nashville. On July 3rd, Modified Phase Two of the “Roadmap for Reopening Nashville” took effect, temporarily closing bars and other businesses and venues with a high risk of COVID-19 spread. Four weeks after this public health decision was made, Dr. Deborah Birx, coordinator of the White House Coronavirus Task Force, visited Nashville to warn the entire state of Tennessee that bars in hotspots should be immediately closed because of their potential to facilitate the spread the coronavirus. Thankfully, Nashville had already taken this step.

“Nashville has made significant progress with our COVID-19 response as a result of these timely, data-driven public health decisions taken earlier this summer. Nashville’s 7-day percent positive rate peaked at 17.1 percent on July 9th. It is 5.1 percent today. Our 7-day rate of new cases peaked at 64.7 per 100,000 residents on July 13th, which is now 15.6 per 100,000 residents as of this morning. These metrics have allowed for incremental, important adjustments to our local economy that are helping more Nashvillians quickly and safely get back to work.

“The Mayor’s office and the Metro Public Health Department remain committed as always to providing timely and transparent information that helps inform our local media and all Nashvillians in the fight against COVID-19. And we’re grateful to all the residents and businesses owners in Davidson County for their hard work and dedication to our ongoing COVID-19 response.”

Three images of emails were also provided. Those can be seen below:

The Broadway and Downtown Entertainment Coalition released the following statement on Friday:

First, we’d like to correct something the Mayor said at his press conference yesterday morning. The Mayor misspoke and identified the Convention & Visitors Corporation as the catalyst for our Be A Honky Tonk Hero. We welcome all support, but wish to note Be A Honky Tonk Hero was a grassroots effort created and funded directly by a coalition of owners of downtown establishments to come together and invest significantly in a public information campaign to promote health and safety of visitors and employees. We did this because we know we can serve safely, and our employees have reached their critical limit of financial distress due the prolonged restrictive limitations put on our businesses.

Bars and restaurants continue to face the most significant prolonged restrictions that are ever increasingly leading to permanent closures and harming hard working Nashvillians who are seeing their opportunities limited and in many cases leaving the city for good. The data continues to not support extreme capacity limitations, with bars and restaurants accounting for just over a 100 of the more than 27,000 cases of COVID that have occurred in Nashville.

Again, even the updated capacity restrictions remains strenuous for our ability to put employees and musicians to work consistently and help them earn a living. We’ve worked through COVID for months now and understand how to control behaviors and keep people safe inside our establishments, something we cannot control when the streets are overcrowded due to limited capacity for people coming downtown to go.

We were promised a data driven approach to COVID, yet we continue to be limited by arbitrary capacity limits and closing times that hinder the ability of Nashvillians to go to work despite incredibly low numbers traced to bars and restaurants. This is not sustainable for much longer and undoubtedly more establishments that provide character and put the Music in Music City will be gone permanently if reason does not prevail soon.