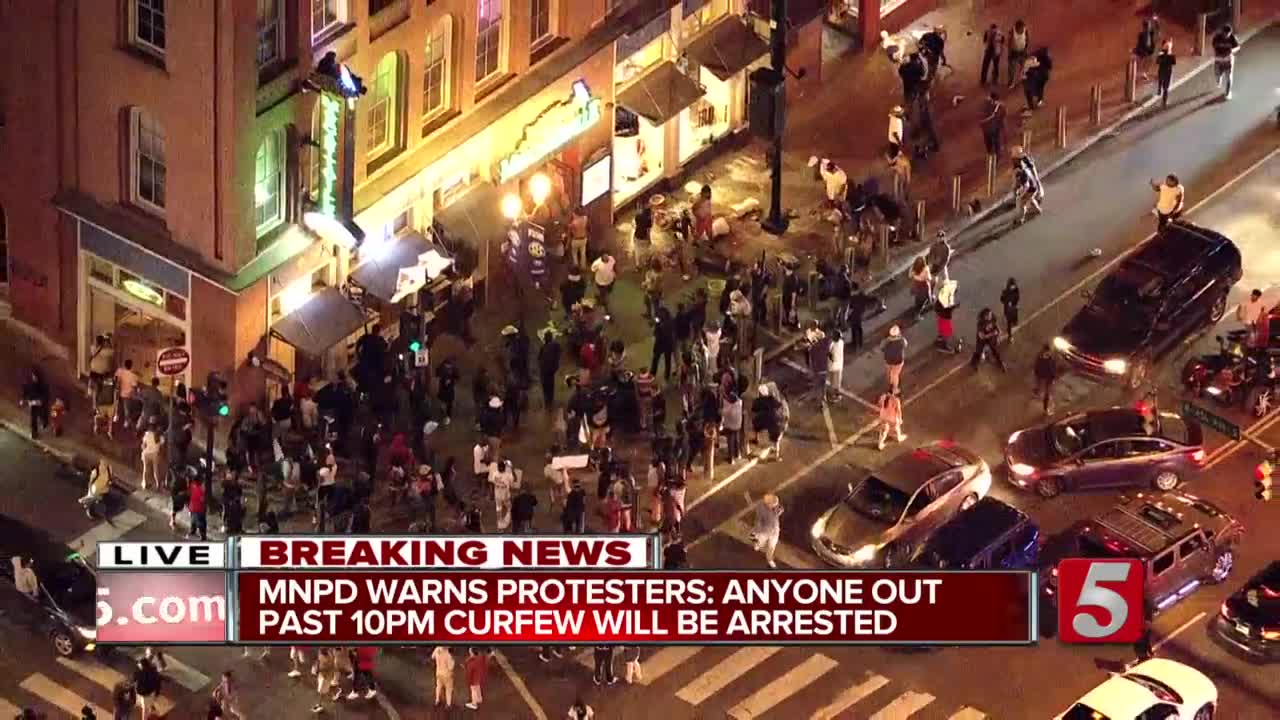 Protesters have smashed windows of downtown Broadway bars including Margaritaville. 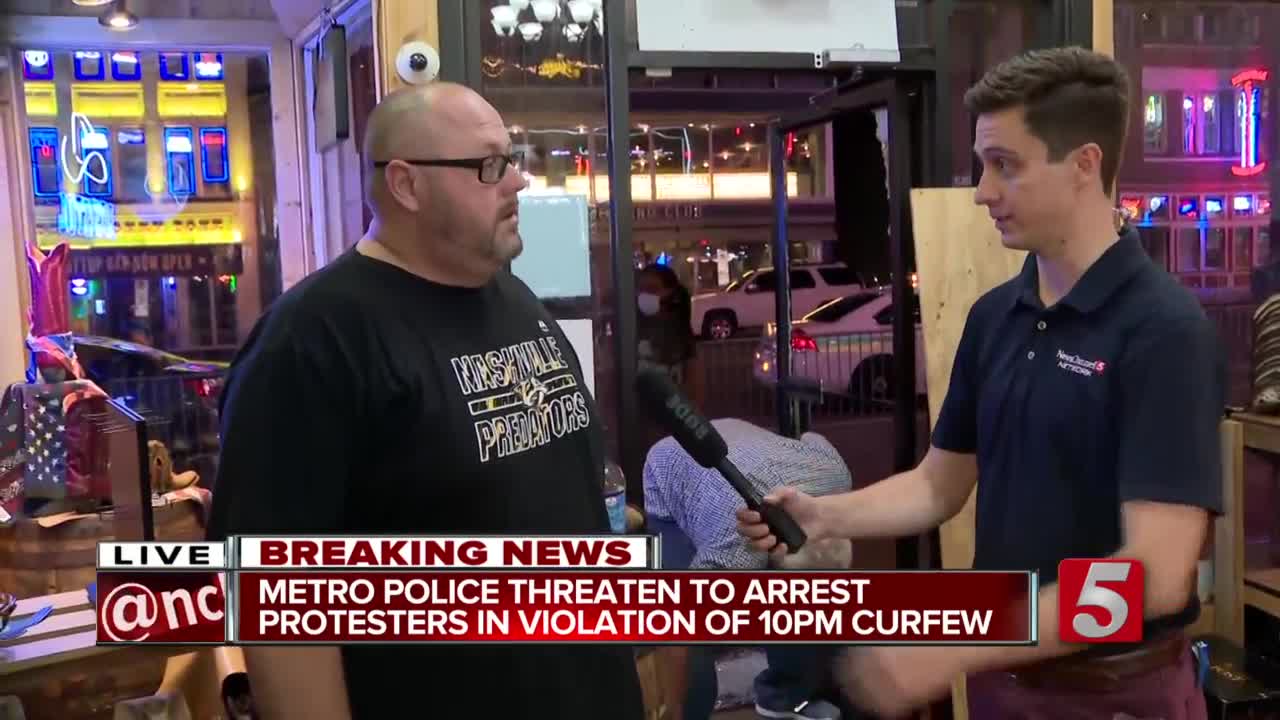 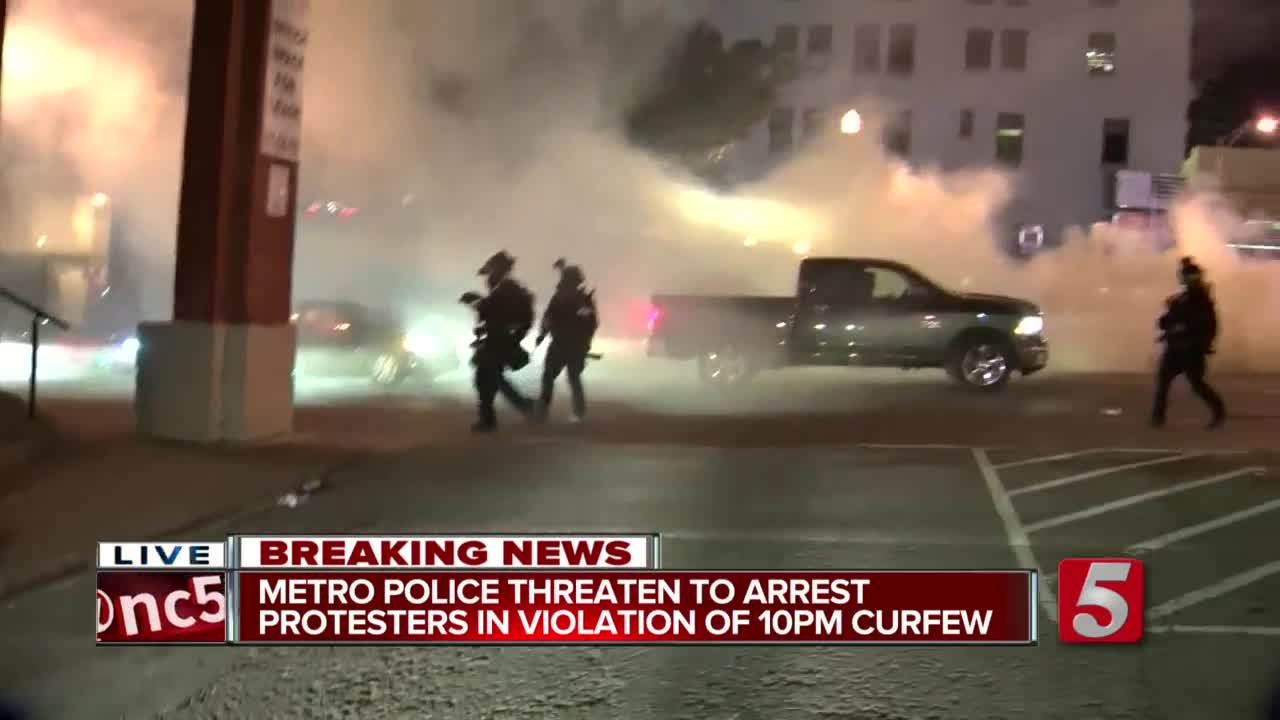 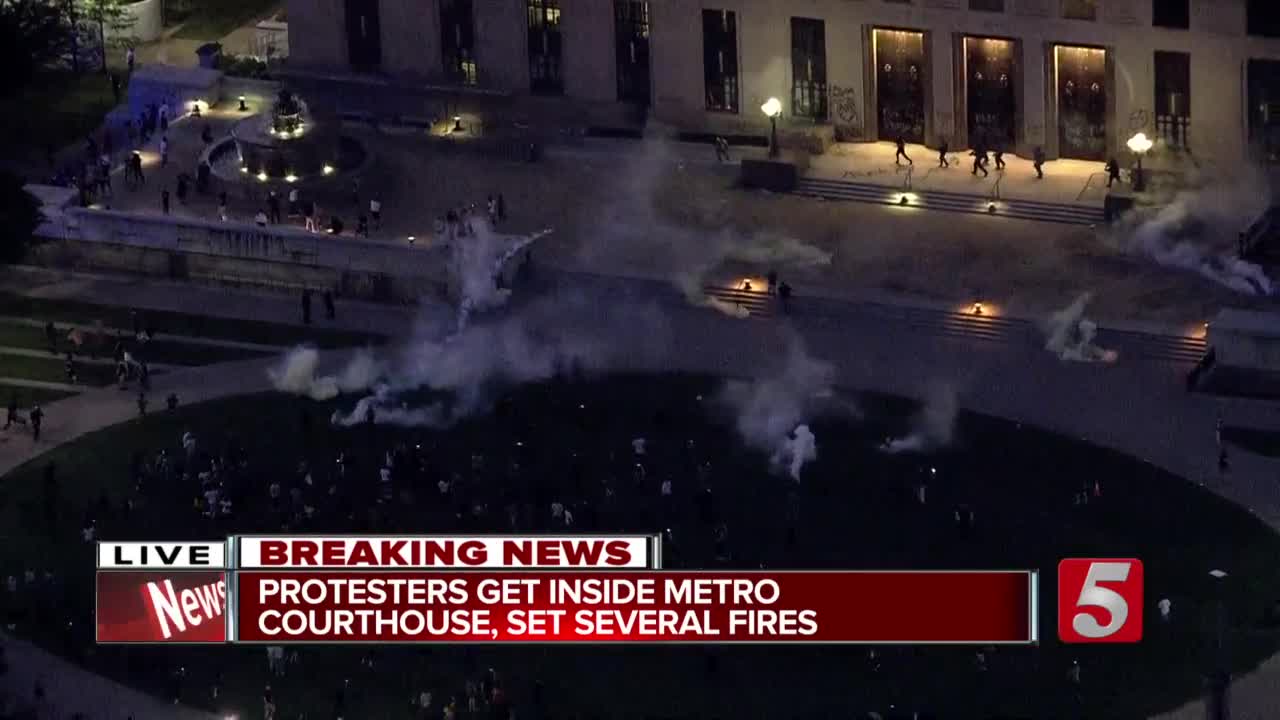 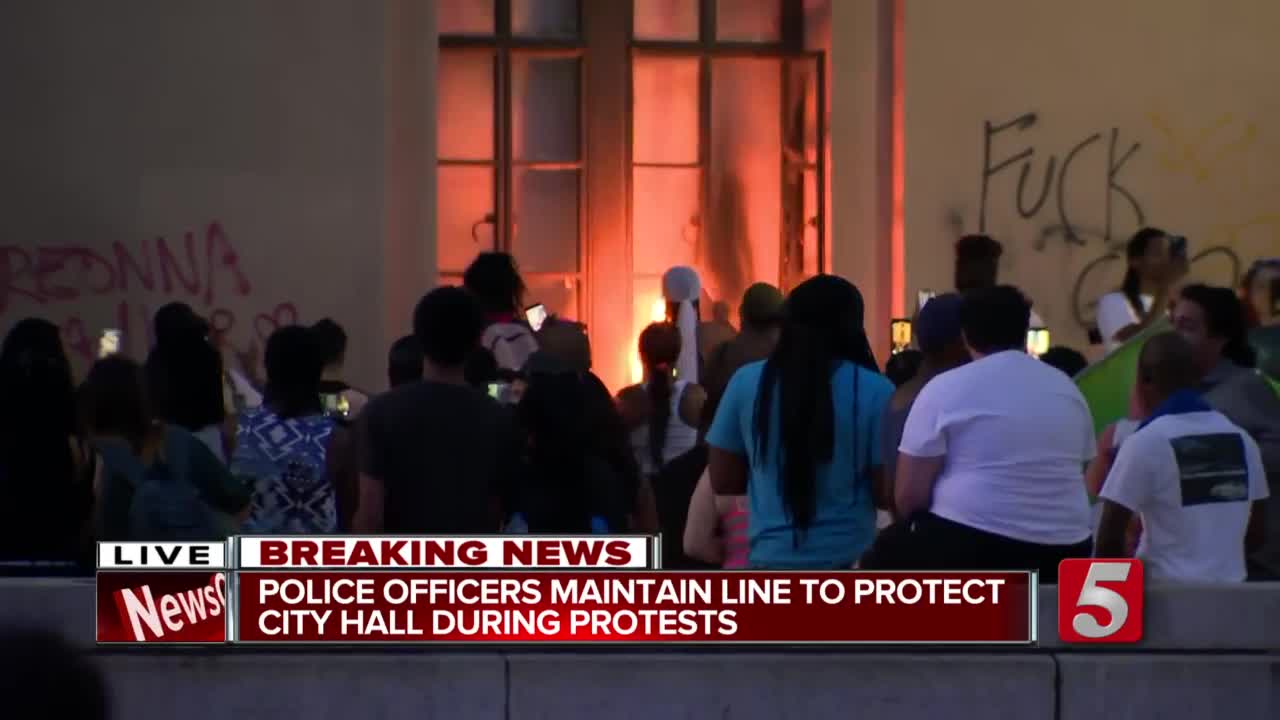 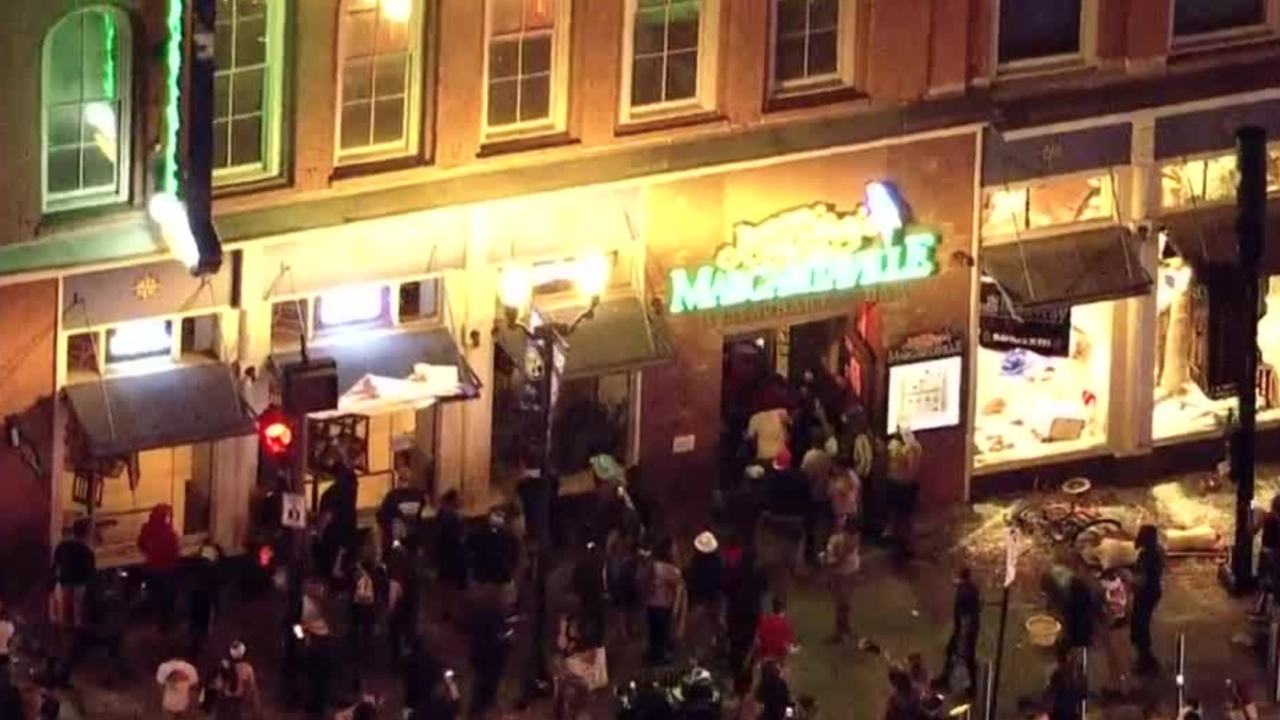 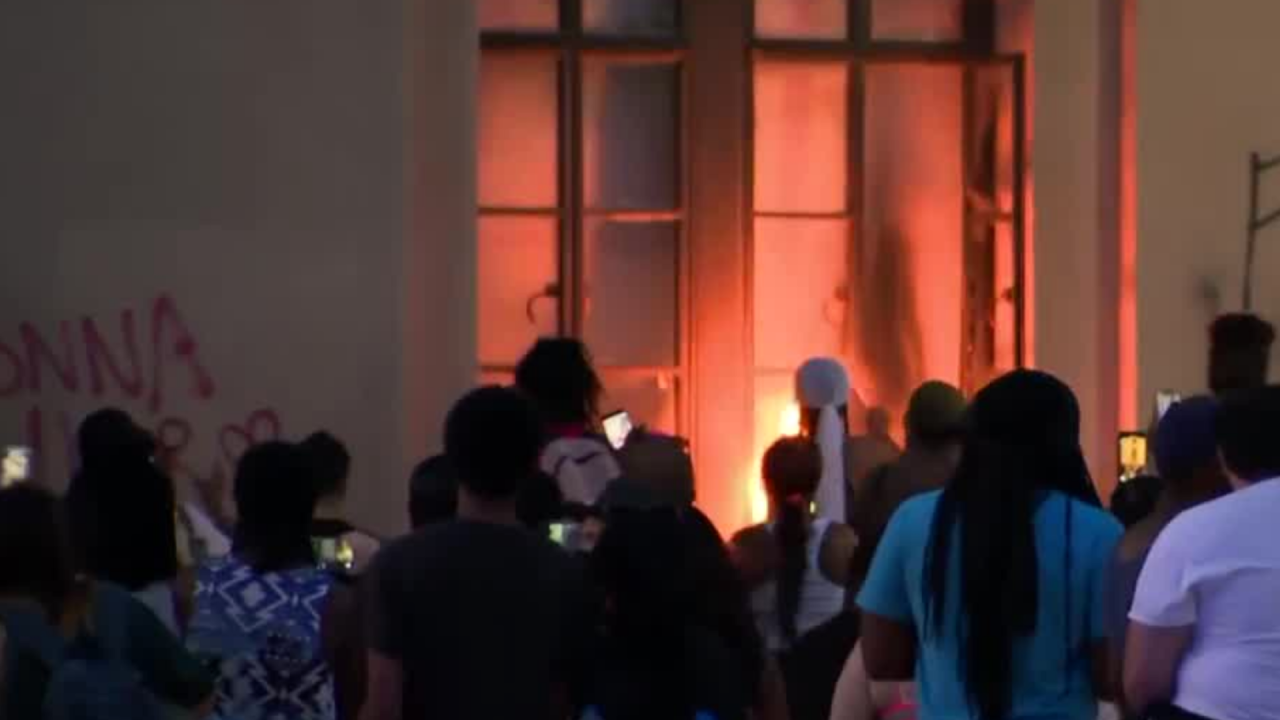 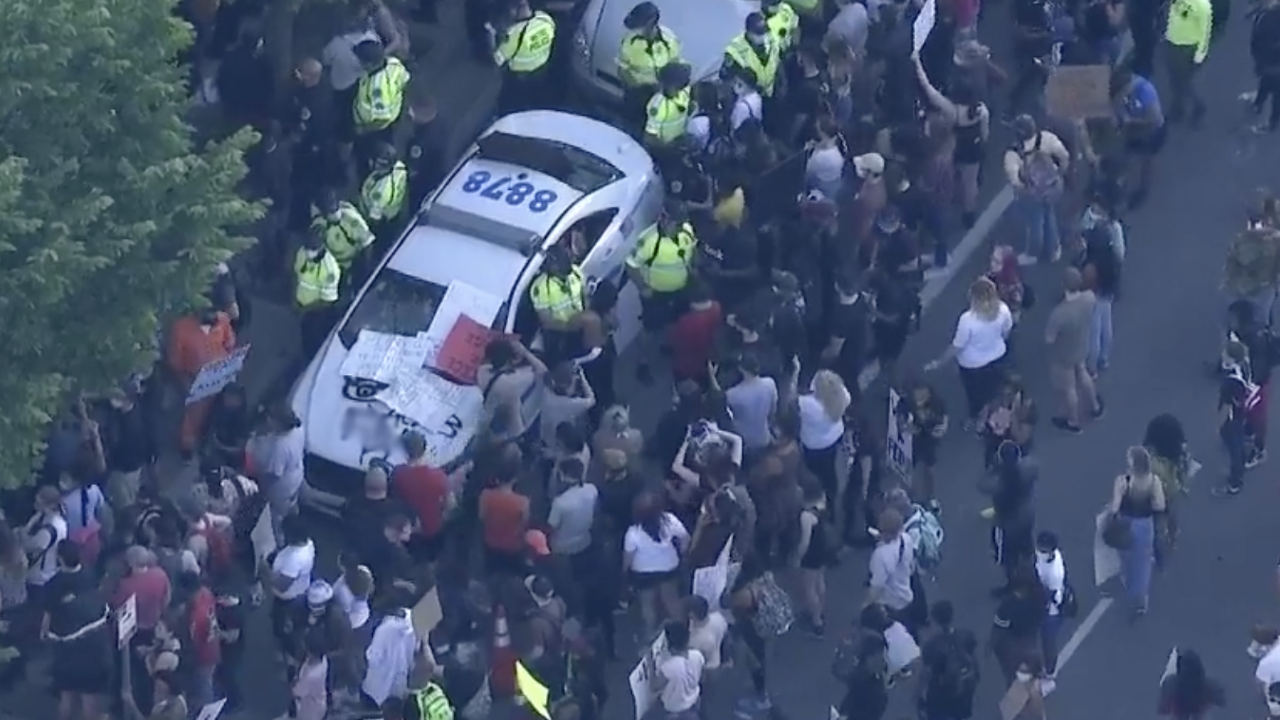 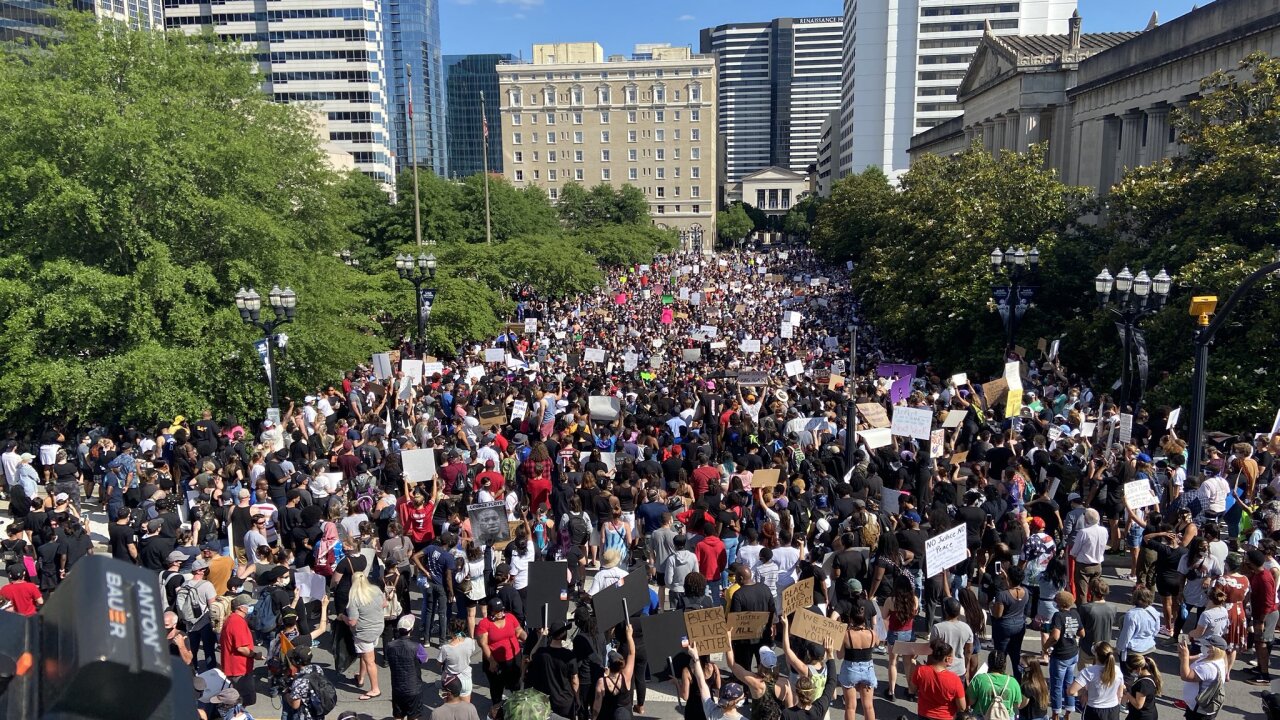 NASHVILLE, Tenn. (WTVF) — A rally in downtown Nashville may have began peaceful, but the night did not end the same way. Protests turned into damage, destruction and vandalism, affecting businesses across the lower Downtown area, from fires set in the Courthouse to businesses broken into and looted across historic Broadway.

The violence began soon after a march immediately following a large downtown rally, but the tipping point came after protesters set several fires in and outside the Metro Courthouse. Around 8 p.m., our Sky 5 cameras captured several people trying to start fires inside windows which were broken hours earlier.

Several minutes later, police arrived and sprayed what appears to be tear gas to disperse the crowd and blocked access to the front of the Courthouse. For the next hour many protesters remained there, some tearing down lamp posts. Police soon used additional tear gas to push the crowd out of the area - first to the sidewalk, then across the street.

After reaching 5th Street, a small group then turned down 5th and broke three windows at Ryman Auditorium.

Metro Police announced a 10 p.m. curfew, and soon after that time, began to arrest people who refused to leave, using additional tear gas to continue to disperse crowds. It's unknown at this time how many people were arrested.

At 10:49 p.m., Metro Police announced that Downtown Nashville had been "essentially cleared." The curfew ends at 6 a.m. Sunday morning.

The event began peacefully Saturday afternoon. Dozens of speakers, including Nashville Mayor John Cooper, spoke for nearly two hours to a crowd of thousands protesting against police brutality and racism after the death of George Floyd. After the rally, the group began a march down Fourth Avenue and onto Broadway. That march then headed to Metro Police Central Precinct on Korean Veterans Boulevard.

But that's when the rally turned violent, with police cars smashed, windows broken, and graffiti spray painted across buildings and cars.

It looks like demonstrators have painted several messages on a barrier and wall in front of Music City Center. @nc5 pic.twitter.com/PBZ0rz7B2a

SWAT officers and mounted patrol arrived after a crowd gathered at Metro Police Central Precinct and Music City Center on Korean Veterans Boulevard after protesters began to smash the windows of police cruisers and tried to light one on fire. Metro police said several people have been arrested near the precinct, but they did not give any details on the arrests.

Later in the evening, some of the protesters spray painted messages near the Music City Center and on the Metro Courthouse, while others threw objects through the courthouse windows. Sky 5 footage captured rocks and water bottles being thrown at officers.

Additionally, a statue of Edward Carmack was also torn down at the state capitol, and WeGo Public Transit shut down the Central bus station and suspended all bus operations for the remainder of service on Saturday evening after 8 p.m.

This afternoon’s rally for George Floyd and racial justice was peaceful. I attended and listened.

We cannot let today’s message of reform descend into further violence. If you mean our city harm, go home.

The Equity Alliance, one of the original organizers of the rally, condemned the violence. "“It is our firm belief that those individuals defacing and destroying public property after the rally were not a part of the original event," a statement read in part. "The actions by this small group reflect neither the beliefs of the groups that led today’s peaceful assembly nor those of the majority of the attendees. This behavior dishonors the memory of George Floyd and other black Americans that have died unjustly at the hands of police."

Metro police say none of their personnel were injured, but at least 6 MNPD vehicles were significantly damaged. There's no word whether any protesters were hurt.

Similar rallies have been held across the United States the the days following Floyd's death. Four days after Floyd's death, Derek Chauvin, a now fired Minneapolis police officer, was charged with murder after he held a knee against Floyd's neck for several minutes. The incident was caught on camera. Floyd died moments later and his last words were, "I can't breathe."

Some of the images we've captures can be seen below. As a warning, much of it has explicit language.