Murder suspect Kirby Wallace is believed to be responsible for multiple crimes throughout Stewart and Montgomery Counties. The manhunt for him continues in a large rural area near the Stewart/Montgomery County line. Here's how he got to this point: 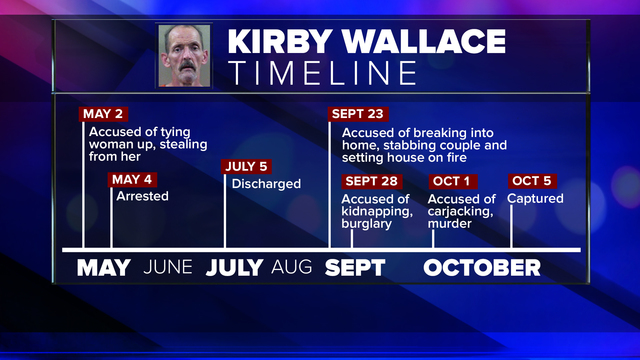 May 2, 2018
Wallace allegedly broke into a friend's home on Liberty Parkway around 11:30 a.m. Clarksville Police say he tied the woman to her bed with ropes, cords and duct tape. He then allegedly stole her credit car, threatening her life if she gave him the wrong pin, then stole electronics from her home. He eventually cut her free.

July 5, 2018
Wallace's case was bound over to the grand jury and he was discharged from jail.

September 23, 2018
Teddy and Brenda Smith were attacked while returning home from church. They were surprised by a burglar (believed to be Wallace) at their home on Rorie Hollow Road in Indian Mound in Stewart County. He allegedly tied up both of them and set the house on fire. He then left in a stolen '05 black Chrysler 300 with TN tag 477MBC. Brenda Smith, who was 63 years old, died at scene. Teddy able to get away and call 911.

September 28, 2018
According to Clarksville Police officials, an elderly woman, in her 80's, was approached while returning to her River Road home after church. Wallace allegedly stopped her at her car and forced her inside at knifepoint. He showed her a loaded rifle, threatened her, and disassembled her phone. Police say he then tied her to her bed before taking her 2013 silver Ford Focus, TN tag 636KTW.

September 28, 2018
Wallace was added to the Tennessee Buearu of Investigation's Top 10 Most Wanted list.

September 29, 2018
Wallace was spotted near Honey Fork Road in Stewart County in a stolen vehicle.

October 1, 2018
A Juvenile called 911 around 9:30 a.m. to report a man wearing camo walking around their home with a pistol. Officials found a nearby resident who had been shot and killed, and the stolen truck that had been crashed on Cumberland City Road and Hayes Ridge Road. Wallace is believed to have ran into the woods from the scene of the crash.

October 5, 2018
Wallace captured in the woods of Stewart County.