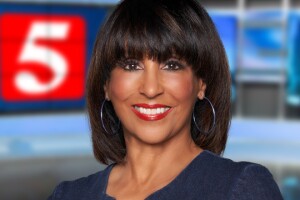 When Vicki Yates brings you the news every night at 4p.m. and 6p.m., you are benefiting from more than three decades of experience and award winning reporting.

In addition to her anchoring and reporting duties, Vicki co-hosts the annual Children's Miracle Network Telethon benefiting Vanderbilt Children's Hospital, a testament to her community involvement on and off the air.

Her career began in Detroit, Michigan while attending college. As a freelance reporter, she worked for Michigan's number one minority newspaper, The Michigan Chronicle. While a junior at Michigan State University, she was hired to work at WJIM-TV as a news reporter. She drew some tough assignments, including the crime beat and various issues at MSU.

From there, Vicki went on to work as a newswriter, producer and news reporter at two other stations in Michigan and Ohio.

Vicki's talent eventually landed her an anchor/news reporter position at WKRC-TV in Cincinnati, where she helped make the noon newscast number one in the market. Before joining the NewsChannel 5 team, Vicki anchored and reported at KDKA-TV in Pittsburgh, Pennsylvania for five years.

She has won six Emmys for among other reports, a mini documentary "Bundles of Joy" on multiple births..a special news feature about the life of Olympian Wilma Rudolph, and for her news franchise, "School Patrol."

In 2011, Vicki was invited by the White House to visit Washington, D.C. and interview President Barack Obama one-on-one.

Vicki spends much of her time on weekends, hosting events for local organizations, or traveling to visit her much loved children.