Sources close to the investigation say they have Kirby Wallace cornered, SWAT has taken over the ground assault and the search perimeter has been narrowed.

Sources close to the investigation say they have Kirby Wallace cornered, SWAT has taken over the ground assault and the search perimeter has been narrowed.

Sheriff Frankie Gray confirmed that an officer spotted him in a field and he’s now surrounded and confined in a very small, wooded area in Montgomery County.

Wallace was allegedly seen in the 4000 block Poplar Springs Road around 12:40 a.m. Wednesday. A man told authorities that he heard his dogs barking and saw a man attempting to enter his porch. The man appeared to have a gun.

From there, he reportedly ran into the woods.

The Montgomery County Sheriff's office said they also received other calls of suspicious activity in the area. A second search perimeter has now been established.

Hours later, a second, credible sighting was reported in the same area of Poplar Springs Road. However, it's not yet confirmed if it's Wallace.

“Stay inside, lock their doors and call us if you see or hear anything suspicious,” Sheriff Gray urged residents.

"We received a call from a resident on Poplar Springs Rd of a man in the woods with a gun. We have sent units to the area and it is currently surrounded. This is not a confirmed sighting of Wallace but is a sighting of a man with a gun, so we are investigating. Please continue to be vigilant by locking all your doors and windows and report any suspicious activity." - Montgomery County Sheriff's Office

The Tennessee Bureau of Investigation said they have no reason to believe that he's left the area. At least 10 agents and 100 Tennessee Highway Patrol troopers were among those assisting in the search.

The manhunt intensified Monday after Kirby Wallace allegedly shot and killed a homeowner during a carjacking on Welker Road.

The stolen truck was spotted on Frankie Road – not far from the Stewart County line. The vehicle was found crashed and abandoned, indicating Wallace was on foot.

If you know someone in that area, the TBI urges you to contact that person to make sure he or she is safe. If you don't hear back in a reasonable amount of time, call authorities.

For school bus riders in the Indian Mound area, deputies will follow buses as kids get on and off. Parents were urged not to leave their children alone while waiting for the bus.

Bus 1724, serving Woodlawn Elementary, New Providence Middle and Northwest High did not run its route this morning because of the search.

Woodlawn Elementary and Liberty Elementary will remain on lockout. Law enforcement will again be positioned at the two elementary schools. Bus routes north of the search area will be accompanied by law enforcement.

Search perimeters remain active throughout the area. Several intersections are still closed and perimeters are up and people are being told to keep their homes locked.

As of Wednesday afternoon, officials said a few checkpoints were still in place throughout the Woodlawn and Indian Mound area.

Anyone living in the area will be allowed home. Except for Poplar Springs Road between Welker Road and Cumberland City Road. It was closed until further notice. 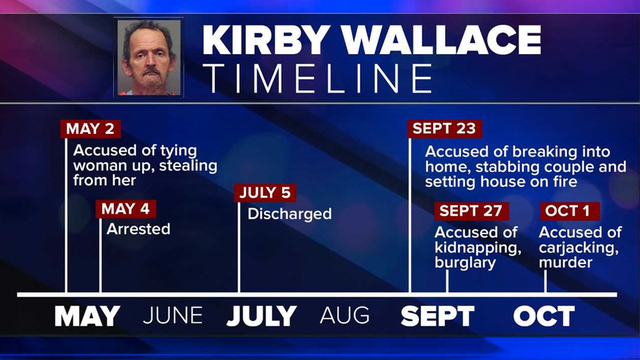 Officials said they've received about 100 tips so far on Wallace. Right now, they're searching the area grid-by-grid and going door-to-door.

Neighbors said they're taking all measures to stay safe.

“I'm prepared to take care of myself and my family if need be,” said resident William Morrow.

Sheriff says Wallace is ‘no Rambo’

Wallace is possibly hidden within a wooded, perimeter area and could be making his way back to a familiar area for him – Seven Mile Ridge Road and Honey Fork Road in Stewart County.

However, there is no evidence that he's somehow escaped the general area.

Sheriff Frankie Gray said it's possible Wallace has received some help. It's also possible that Wallace has a stash of supplies hidden in the woods, including possibly illegal drugs. He is a known user of meth.

If you would like to donate water, drinks, prepackaged snacks or food to those involved in the search, you can drop off the items at Blooming Grove Baptist Church, located at 3900 Lylewood Road in Woodlawn.