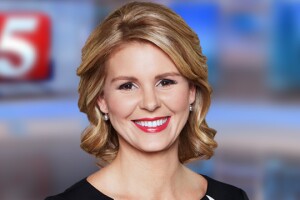 Carrie Sharp is an EMMY winning journalist who has always had a heart for telling stories.

Journalism is the only job she ever considered, but only landed on the television side of the business thanks to a college internship. After working an entire summer for WAVE 3 TV in Louisville, KY she was hooked. In fact, she stayed with WAVE for the next 12 years climbing the ladder from intern to morning news anchor. Along the way she covered the Kentucky Derby, landed the first interview with high school shooter Michael Carneal, and won two Emmy awards for investigative and feature reporting.

In 2010, Carrie and her husband headed north to Michigan to his hometown where she enjoyed sleeping in past 2AM and anchoring the evening news for WNEM TV5.

Never did Carrie imagine that winter could last seven months! So after five years, she set her sights on returning south.

Carrie feels privileged to sit alongside Rhori Johnston and Vicki Yates to bring you the news weeknights at 4, 5 & 10PM.