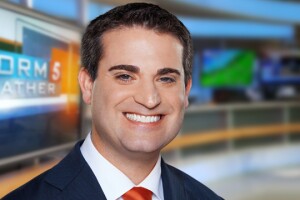 A native Tennessean, Emmy Award winning meteorologist Henry Rothenberg loves being able to call Nashville and NewsChannel 5 home, and work alongside the talented members of the Storm 5 Weather Team.

Born and raised in Memphis, Henry is no stranger to the ever-changing weather of the Mid-South having experienced everything from Ice Storm 94 to the Super Tuesday tornado outbreak in February 2008.

Believe it or not, Henry was terrified of thunderstorms until he was seven years old. That's when his cousin took him outside during a storm (highly advise against that now) and explained to him what was causing all of the scary noise. It was from that point that his fear became a fascination and now a career!

While a junior in high school in Memphis, Henry began shadowing the weather team at CBS affiliate WREG-TV. He mainly spent his time shadowing Todd Demers on the morning newscast. He arrived at the station at 4:30 a.m. when his school schedule would allow and spent as much time at WREG as time allowed. Henry credits this experience with jump starting his career.

Henry attended the University of Missouri where he was a member of the Mizzou Storm Chase Team, chasing storms all across the plain states. Henry's desire to chase storms when most are trying to avoid them is fueled by his passion for weather, and desire to keep people safe in dangerous weather.

Henry's on-air career begin while just a junior at Missouri when he was hired by KMIZ-TV. He went on to work for KPLR-TV in St. Louis, MO, WPTY-TV (now WATN-TV) in Memphis, TN, and WACH-TV in Columbia, SC before making his way to Nashville.

Aside from weather - Henry is a big sports fan (Go Cardinals, Go Grizzlies, Go Titans, Go Preds)! If you see Henry out in the community please don't hesitate to stop and say hi! He loves meeting members of the community in person.