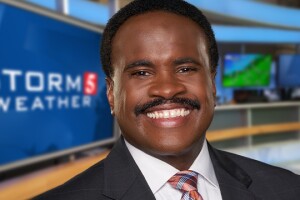 Lelan A. Statom is an Emmy Award winning meteorologist who has been helping Mid-Southerners start their day for more than 15 years. Since 1999, he has been part of the station's #1 rated morning newscast, NewsChannel 5 This Morning. Lelan joined the NewsChannel 5 Network in 1993 as weather anchor for the weekend morning and evening newscasts.

In September 2006, he was named co-host of Talk of the Town, the station's long running & top-rated talk show.

He was born in Chicago and raised in Dyersburg, Tennessee. Lelan says his interest in weather dates back to 7th grade. In fact, he had his own weather center in his backyard when he was in middle school.

Lelan earned a Bachelor of Science in Communications with an emphasis in news & public affairs at the University of Tennessee- Knoxville. He received his Certificate of Broadcast Meteorology from Mississippi State.

His TV news career started in Knoxville, first at WTVK-TV(It's now WVLT), then at WATE. He worked as a weather anchor - and then some. In Knoxville, he did several jobs (producer, photojournalist, tape editor and weekend assignment editor). Lelan also worked with Black Entertainment Television News during his time in Knoxville. In 1990, he moved to Bristol, VA and WCYB to become a weekend weather anchor/reporter.

Lelan has received several awards and honors during his time in Nashville. In 2007, he (along with Ron Howes & Charlie Neese) received a Mid-South regional Emmy award for coverage of the tornadoes that hit the area in April 2006. He has received three other Emmy nominations for best weathercast. In 2006, he was awarded Best Weathercast in the state by the TN Associated Press.

He is a past Black Achiever with the YMCA and has been honored for his work on TV and in the community by the Gospel Music City Awards, TN Lay Organization of the A.M.E.Church and 4-H.

Lelan remains active in the community. He is a volunteer with TN & Davidson Co. 4-H. He also serves on several boards including Cornerstone Financial Credit Union, Northwest YMCA, Middle TN Boy Scouts, Laughter is the Best Medicine and the Board of Visitors for UTK College of Communication & Information. This is in addition to speaking to thousands of school students each year across Middle TN and Southern Kentucky.

Lelan is a member of the National Weather Association & American Meteorological Society. He has the TV Seal of Approval from both organizations. He is a member of 100 Black Men of Middle TN and is the president of the Nashville Assoc. of Black Journalists.

With regards to his day job, NewsChannel 5 This Morning continues to be one of the highest rated local morning newscasts in the country while Talk of the Town continues to be among country's most successful local talk shows.

Lelan's forecasts not only help you plan your day, they are a big help to him. On days when he sees clear skies, Lelan takes to the parks for walking or bike riding. He also loves to take pictures. His favorite subjects are his wife Yolanda and their daughter Kayela and son Taylor.