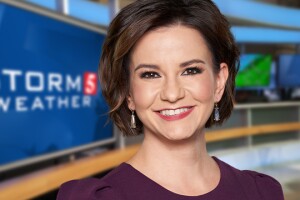 With a middle name like ‘Sunshine' Bree was destined for weather. After graduating with a degree in Theatre Performance from Southern Methodist University, Bree spent three years working as a professional actress both on stage and film in New York City.

With a heart for service, Bree felt driven to do more for her community though. In the wake of the 2004-2005 hurricane season God compelled her to follow her love of weather and return to school to obtain a degree in meteorology. She began her meteorology studies at Florida State University and finished her degree at Florida International University graduating with honors. During her time in Florida she also interned at WPLG-TV. After graduation, her husband’s career took them to New Orleans. Shortly after arriving in Louisiana, she began her career as the weekend meteorologist for WVLA in Baton Rouge.

In 2011, she moved to her husband’s hometown of St. Louis and joined KSDK as the weekend meteorologist. Bree spent five years in Missouri tracking tornadoes, winter storms, and the historic New Years flooding of 2016. In 2015, she got the chance to do the weather with Al Roker on the TODAY show. Also that year, she became a Featured Contributor for the TODAY Parenting Team.

Bree is an Emmy nominated meteorologist and member of both the National Weather Association and American Meteorological Society. In 2015 she received a Weathercast Certificate of Merit from the Missouri Broadcasters association. She is thrilled to be joining the Storm 5 weather team and looks forward to serving middle Tennessee.

Bree is an animal lover with one rambunctious cat named Jack, she is a blessed mother to her own little toddler tornado Cole, and wife to her darling husband Curt.